Seventeen years at Open Arms Infant Homes is the longest period of time I have ever spent in one place, closely followed by Ashville College.

'Workplace' is not quite the correct term to describe Open Arms. Open Arms became a way of life for Rosemarie and me, and after her death I was able to immerse myself even further in this wonderful institution. During those years, I was fortunate and privileged enough to make firm friends of different people from all over the globe and from virtually every age group. Many of these friendships still exist today and make my task of moving on to newer pastures easier. A definitive list of those who have helped is impossible to relate. Many, if not most, have indeed been thanked through the newsletters, with those who have played a key role in supporting Open Arms being recognised individually.

The history of Open Arms and its growth has also been well documented, but I would like to offer one or two personal thoughts and impressions gleaned over the last nearly two decades.

The success that Open Arms undoubtedly is, would never have happened without the wonderful goodwill and loyalty of almost every one of our hundred staff. 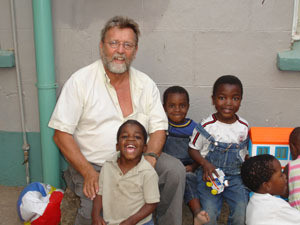 Their dignity and dedication, their friendliness and happiness, in spite of in many cases serious privation at home, has been constantly sobering and humbling. I could find something good to say about almost every single individual and I wonder how many large employers could honestly say that.

Mrs Phiri and her team of assistants and supervisors have been entirely responsible for the welfare of many hundreds of children who have passed through Open Arms over the years. I will miss that short woman in the blue uniform and her staff, as friends as much as anyone else.

The administrative teams both in Mangochi and Blantyre, until recently headed up by Jasmine, have eased the problem of my almost total lack of IT skills and contributed fantastically to where we are today, as has our Harrogate based professional team of fundraisers, initiated by Emma Vanson. 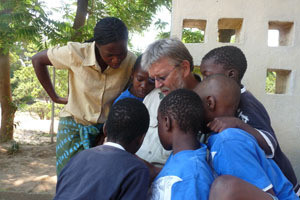 I would want to record my special thanks to our two Boards in the UK and in Malawi. They have made my life very much easier for the knowing that I generally had their support for the many developments and projects that have occurred over the years. Though more remote from us, the financial assistance that we have received from our Board in America has been consistent and much valued. Now that time will allow, I intend to take the opportunity of making contact and perhaps visiting with the many people in the USA who have supported us over the years. Not in the least the congregation of 'First Baptist Church of Donelson' of Nashville who have been unfailing supporters for almost twenty years.

We commemorated the tenth year of Rosemarie leaving us in September. Before she left us, Rosemarie was the Director and I the Development Officer. When I suggested to her in 1999 that we gave up our comfortable lives in leafy Green Lane Harrogate, to return to Malawi to try to serve the community, Rosemarie responded with alacrity and enthusiasm. At that time there was no salary, or indeed any incentives at all available, apart from returning to a country that we have both fallen in love with during our previous ten year stint with the Designated School Board of Malawi. I know that she never looked back and I know that I haven't either. Being able to offer a valuable service in a country whose people you have a great affinity with was not difficult and is something I have never regretted.

In 1999 a spirited group of teachers and parents of Ashville College made it possible for us both to settle into our new country as volunteers. They mostly went on to form the first Board of Open Arms and their continued encouragement during our early years here smoothed the way to a more permanent existence.

Life without the demands and rigours of Open Arms will be very different. However, I think it would be impossible to relinquish all of the many connections and decision-making processes that have kept Open Arms in the forefront of orphan-based care in Malawi. I intend to remain in the country, spending more time on the farm that I have developed in Chileka with Enipher, getting away more often in my beloved Land Rovers and sailing the Rosie Ellen on Lake Malawi - surely enough to keep a normal person happy. 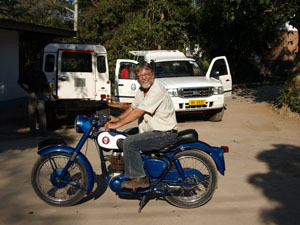 There are many things that I could single out that I saw as achievements for Open Arms, but the reintegration of Aubrey Jackson into normal life both at home and in the workplace will remain the one I am most proud of. Aubrey was the first child collected by me in the now aged Blue Venture. At three weeks he weighed a mere three pounds and his premature delivery contributed towards a mild form of cerebral palsy. The educational success of some of Aubrey's peers attending some of the best schools in the country are similarly major milestones in the life of the students and of the home.

None of these achievements, including the successful return of hundreds of small boys and girls to their rightful environment, would have been remotely possible without the moral and financial assistance of the countless people who have made Open Arms the success story that it is, and to all of you, I offer my heartfelt thanks and gratitude.