What a wonderful summer of laughter and adventure we enjoyed with the students and teachers of Lancing College, who arrived at Rose's House bringing their friendship, humour and positive energy, then five weeks later departed once more, leaving an abundance of fond memories and a lasting connection of understanding and companionship in their wake.

It's incredible to think just how much we managed to squeeze into such a short space of time, and the boys of Rose's House are still recalling the many amusing and heart-warming anecdotes of their time spent together. Here, Matt Smith, Senior Housemaster and Head of Drama at Lancing, and leader of their annual expeditions to Malawi, shares his recollections of an unforgettable trip 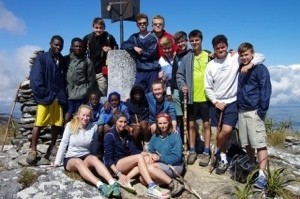 "Undoubtedly the highlight of Lancing College’s five week expedition to Malawi this July was for our 18 students to meet finally (having heard so much about them, emailed with them and seen the video!) with Aubrey, Moses, Norman and Wilson of Rose’s House and spend time at their home with Hilda and Joyce, at football training, and then to be able to take Moses, Norman and Wilson hiking on Mt Mulanje. (We were sorry that Aubrey’s injured foot meant he couldn’t join us, but we had great times with him before and after!) It was the culmination of a year of preparation and gathering excitement for the Lancing boys and girls as they anticipated meeting the boys, but nothing could have prepared them for the warmth, friendliness and irrepressible good humour of this delightfully impish, mischievous quartet and their wonderful housemothers, not forgetting of course the magnificent Jonam who accompanied and cared for them on Mulanje, and the girls of Richmond House who were joined by our girls and lady teachers for netball training and then shown their home afterwards.

"We collected the boys from football training and brought them back to St Andrew’s Primary School where Lancing was billeted. After a quick sandwich lunch and the first of many card games that were taught – the more raucous the better! – we drove down to Mulanje, staying the night at Likhubula before our ascent the following morning. Kitted out with the requisite customised (named) cedarwood walking sticks, we set off on the Milk Path for the CCAP cottage, Hope’s Rest. The conditions were excellent – a cooling breeze keeping the temperatures down as we made the climb over 6 hours, stopping for crisps and chocolate half way. The boys not only kept up, but also set, a good pace! On arrival at the cottage, hot soup was enjoyed before the first Lancing cooking team started to prepare pasta, with a tomato, onion and garlic sauce for the evening meal. Meanwhile Norman took the initiative in the card games, with Moses and Wilson not far behind, and Slam, Rummy etc proved excellent ways of getting to know each other, the boys whooping with delight at a winning hand, eyes bright with excitement in the firelight as the evening shadows lengthened and the hot chocolate jar emptied. The next morning saw everyone ascend Chilemba peak for spectacular views in a cloudless sky, with photo opportunities aplenty, before returning to the cottage for lunch and an afternoon stroll to Linje Pools, returning just in time before the chiperoni set in for the afternoon. More card games, more cooking (same menu, different cooking team) – and the Rose’s House boys gave their verdict as to the winning cooks – but with prizes for all waiting at the bottom of the mountain…

"A dawn descent found us walking in the clouds to begin with, before picking our way carefully over boulders and down the rocky paths to the base of the mountain. Time for our reward – freshly cooked pizzas at Nancy’s Dream Restaurant, with all the toppings you could imagine – we all enjoyed watching the pizzas being assembled and then fired in the oven, sharpening the appetite for the meal to come! Then it was back to Blantyre for a good sleep before meeting at Rose’s House the following day. Aubrey had our undivided attention as he proudly showed us round his home before the others returned from school for gift giving and the impromptu, but inevitable, game of yard football / netball, which Hilda and Joyce joined in enthusiastically. There was much hilarity in the ensuing hour before we finally parted with high fives and wide smiles. But this is definitely au revoir and not goodbye – and we very much look forward to hearing about and from the boys in the coming months before meeting up with them again on the next Lancing expedition in 2016. Zikomo Kwambili to everyone at Open Arms who made this visit possible for us, and especially to Aubrey, Moses, Norman and Wilson who made us all feel so welcome and were very special companions and team members (with the t-shirts to prove it!) over the four days we were with them".

We are thrilled to know that the Lancing students benefited from the experience just as much as our boys at Rose's House... We shall be counting down the months until the next time we see you!