My first posting was in Rumphi, in the Northern Region, where I worked as Nurse-in-Charge of a mixed paediatric and female ward while I studied midwifery.

Many friends of Open Arms know you as the Matron, can you tell us a bit about yourself and what you did before Open Arms?

My name is Rose Phiri, I am Malawian and I am in my 60’s now. After school I trained as a State Registered Nurse and Midwife in Malawi and then Public Health and Family Planning in Kenya. Even as a student waiting for my nursing results I was put in charge of the Nursery Section at Queen Elizabeth Central Hospital. Conditions were bad at first, but I set about improving things.

My first posting was in Rumphi, in the Northern Region, where I worked as Nurse-in-Charge of a mixed paediatric and female ward while I studied midwifery. It was in Rumphi that I first met my late husband, Vincent Phiri. When he joined the Foreign Ministry, we got married and travelled together for his first posting in London. I had the chance to trot the world with my husband, as he was later posted to represent Malawi in the USA at the United Nations in New York, then Zimbabwe and Kenya. So before Open Arms, I was a Nurse as well as a Diplomat’s wife.

Those of us who know you have seen that you can add glamour and flair to an event! We love it when you wear a dress from your diplomatic days. There is a lot that you have contributed to Open Arms, perhaps you could tell us what you see as your major achievements?

Perhaps most importantly we reduced the mortality from 29 fatalities in the first year I arrived to only 2 in 2012, which took a lot of work. I had to study how things were done and find remedies for the smooth running of the day to day services. At first I was overwhelmed and thought ‘My goodness! Where do I start?’

I introduced on-the-job training to improve service standards in cleanliness of both staff and utilities, and formulated menus to improve the nutrition provided. As the operation grew I advised for more staff, which meant the Supervisors didn’t need to help in the kitchen. I have seen the Supervisors improve how they work and learn together, so they are now on par. I had to sort out the record system, and that’s how I discovered the high mortality. It was step by step, one day at a time, like our motto says. With the hardworking spirit of our staff things started picking up.

Now we have a good handover system when the shifts change. When I arrived I found a note on the board “D and V”, so I asked who is this for? It meant diarrhoea and vomiting! First we started with oral handovers in Chichewa, and the ladies have learned how to record the health issues in English and it is perfectly handed over. Now each group has a routine to follow and the leaders know what to do.

Being Matron I have been a bridge between Management and staff. I came when Rosemarie was Administrator. After her passing, may she rest in peace, I had to deal with a number of different administrators, some of whom were short-term volunteers. I had to adjust to working with each one’s administrative style and keep the momentum going at the Home.

There have been hundreds of children who have passed through Open Arms, can you tell us of one child who touched you?

In my heart I always think of Jacqueline, who came to us before there were Anti-Retroviral Drugs for HIV. She almost died. I can still picture her one day as she lay in her cot, tiny, emaciated, with her hand on her cheek. I almost cried. Then seeing her improve, being cared for and finally returned home. She is one who I am proud to be associated with. She is now ten years old and visits monthly to receive a Cash Transfer. Since my arrival about 216 children have been discharged, many of whom could have died if we were not here.

Tell us more about your early days at Open Arms…

Rosemarie was the one who interviewed me, with several other Board Members. I came away not knowing if it was an interview, because she put me at ease with her calm and accommodating manner. Some of the things I achieved were because she listened and gave me the space to try. Then she would call to give me advice and recommend any improvements, which was very motivating. She made you feel you belonged.

In those days we had no driver, so Neville and I used to go on Outreach together. We got stuck in the mud so many times and tracked down kids on dirt trails way out in the bush. The first time we saw a man running a treadle pump in Chikhwawa we stopped and asked questions and I tried it out, wearing my white high heels! It was hard work, but I’ve seen kids doing it for fun which is great for the fields. The government was introducing these irrigation pumps. On Outreach we look into food security and health aspects for the children. 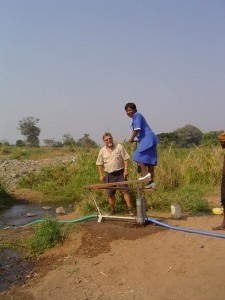 It is very satisfying to see kids who went home and are adjusting well. It is most painful when a child went home after two years of care and then died, often because the village is far away from a medical centre, and the child didn’t reach there in time. It’s not always a cup of tea!

What makes you laugh when you think of Open Arms?

Our monthly staff meetings always make me laugh, and on our annual staff trips to the lake we forget about work and have fun. Bringing teamwork amongst the staff is one thing I have done, mostly by being exemplary and by studying the staff on their skills and knowledge.

What are your hopes for the future?

I am very happy that I have had a part in selecting and training my fellow Matron. Eniffer Chilunga is a fast learner, a hard worker, and even if I leave I know there is someone who will keep our standards going. We are known for our high standards and have worked hard for them.

I feel like I’ve done the job I came here to do. I hope to retire one day, live in Lilongwe and maybe run a small business. But I will definitely come and visit Open Arms to recall the good years I spent here. 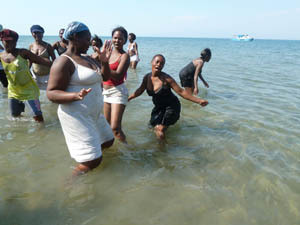