On outreach with Mrs Phiri

Mrs Phiri, Kondwani and I set off from the home loaded up with maize at 8am to be greeted by busy Blantyre roads, with a variety of cars, people, animals and potholes to navigate.

Once we got out of the town though we passed village after village. There was so much to see I could barely concentrate on driving or the potholes!

It was day one of my trip and I was invited to spend the day driving Mrs Phiri on her outreach visits. These are visits to check on children that have moved on from Open Arms and are now safely back with their extended families.

Mrs Phiri and Kondwani go on outreach trips every week but these visits would be slightly different as we were taking some emergency food supplies to the children as well.

Most of the families that Open Arms support live on food that they have grown on small pieces of land near their houses.

But because of the lack of rain, the harvest has failed for the second year running and so families are facing a very difficult few months until the next harvest in April.

They are literally living on fruit and vegetables while they wait for the maize to grow and children are the most vulnerable. 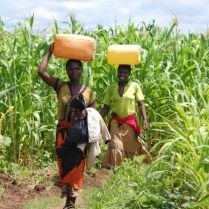 After we’d been driving for a while, we turned off down what can only be described as a small path. This was not even a track. It was overgrown, bumpy with no discernable direction. But Kondwani navigated us through, and I dubiously followed.

We visited so many houses where the families told us that they were hungry but ok. They were all living on fruit and vegetables and doing bits of work when they could to get money to buy maize. 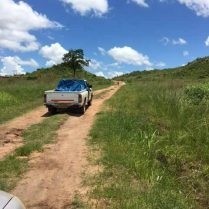 When we reached the houses, chairs appeared out of nowhere and shade and water found for us immediately, it was moving to see how grateful and welcoming everyone was for such a small amount of help.

It was good to see that the maize around their houses was growing well, but unfortunately this won’t be ready to eat until April. It’s cruel that families were surrounded by such lush vegetation as their food grows tantalisingly slowly.

It was a real symbol of the resilience and patience of the communities in Malawi.

I watched in wonder as the ladies hoisted bag after bag of maize we bought them upon their heads. It was unbelievable. I couldn’t even roll them! 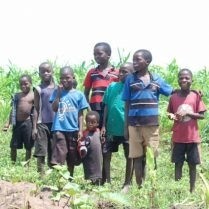 One house we arrived at we were greeted by about 12 young boys. Mrs Phiri explained that it is common for children to miss school as their parents are working in the fields and so older ones often have to look after their siblings. The boys were intrigued by us and loved having their pictures taken.

We were there to see a girl called Miriam and were warmly welcomed by her aunt and her grandmother. Miriam’s grandmother was around 75 years old and still worked the field to help her family.

Miriam was overwhelmed to see Mrs Phiri, she had tears in her eyes as she hugged her tightly. She is a beautiful young girl of around 14 years old.

It was remarkable to think she came into Open Arms as a tiny baby and was now living back with her family. She told us that she enjoyed school and proudly showed me her books. 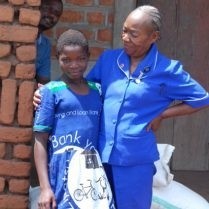 The next house we visited was very tough to see. The family clearly had no money, and while it was good to see the child that we were visiting out at school, it was difficult to comprehend what life is like for them. There was a little girl there who didn’t leave my side. Her mother told us that she had malaria and diarrhoea from her diet of mangos. She was four years old, the same age as my daughter at home but their stories are worlds apart. She stood and sucked her thumb in exactly the same way.

Mrs Phiri left her with some medicines and vitamins to try to boost her immune system, and the extra food we left will improve their nutrition and hopefully make life a little bit more comfortable until the next harvest is ready.

We arrived back at the home by 2 pm after seeing just seven families and travelling for six hours on roads like I have never seen before. 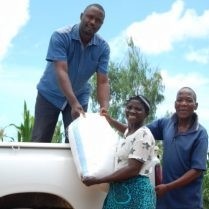 It was amazing to see Mrs Phiri and Kondwani talking with the families, sharing stories and jokes in what is clearly a difficult time for them. There is such a strong sense of community in the villages, with extended families looking after many children and old and young all working to provide what they can. It was also encouraging to see the extra effort that goes into making sure that the children go to school too.

Mrs Phiri goes above and beyond the call of duty at every visit. I saw her teaching basic hygiene, nutrition but also just sitting and listening to people tell their stories. I’ll remember all the families that we saw but seeing Miriam successfully reintegrated with her family and progressing well at school despite a very hard start to her life, will stay with me for a long time.

It was a humbling and tiring day, and I was in awe of the determination of Mrs Phiri and Kondwani to deliver the food and check that the children from Open Arms are still being supported back in their communities.

It was a real privilege to be able to see first-hand the impact that our work has and the difference that our supporters allow us to make.

DonateIf you would like to help us support children back in their communities donate here just £10 will pay for a visit to check on one of our children that has moved back home.