The adventure of a lifetime – part one

When the idea of a charity cycle ride in Malawi was first suggested there were all sorts of reasons for it to be a good idea. After all having a bike in Malawi is not a leisure choice but an absolute necessity.

Without a bike many people cannot travel the long distances along tracks to main roads to get to work, they cannot carry the loads they need to make a living and even the taxis are bikes.

And so when the idea came about, the planning started. Two years later, I was finally on my way. I couldn’t quite believe that I was getting on the train to Heathrow to join 15 other people.

To get to this point we had all trained hard, but even then we didn’t really know if we had done enough. 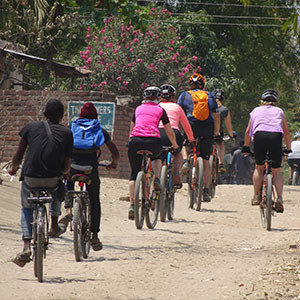 After the long flight, we arrived in Lilongwe and once we had negotiated customs we met up with the rest of our party who had travelled independently. We also met our guide Claude and the Malawian ground crew who were going to look after us for the next week.

Loaded on to our buses we set off for Mua Mission for our first night. Most of the party had never visited Africa, let alone Malawi and a hush came over the bus as we left the town and travelled through the countryside taking in the barren beauty of Malawi, the small villages lining the roadside, the children playing outside the houses, village water pumps, goats running across the road, charcoal being sold on the side of the road, bikes loaded with wood, crates of coke and all number of strange cargos.

Our bus arrived safely at Mua Mission only to find out there was no power and to the news that the other bus had broken down about half an hour away. Darkness in Malawi is all consuming, like nothing we experience here, there is no break in it, no light pollution glow in the sky. Driving at night is dangerous as none of the locals bikes have lights and lights reflective clothing just doesn’t exist. 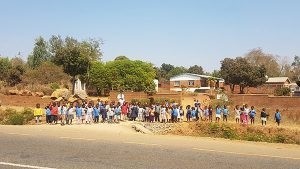 However, the group on the other bus had made the most of their time on the side of the road and ended up dancing with children who came out to see them and handing out sweets. Once they arrived our first night dinner, cooked entirely in the dark, was a delicious and noisy affair with everyone getting to know each other. We were given an introduction to the week ahead and our next days cycling by Claude and an extensive health talk by Dr Chris who had traveled with us from the UK. The main message was, whatever you do, whoever you’ve shaken hands with, whether you’ve washed your hands already, use antibacterial gel before you touch or eat any food and check that your wee is champagne coloured every morning!!

Day one and we were up early for breakfast and a bike fitting. Our bike mechanic Abuja did a great job getting us all ready for the road. After a final briefing from Claude we set off. What a feeling it was to finally get going, I think it was quite a moment for all of us but definitely me. As we cycled along the track children arrived at the side of the road from nowhere smiling, waving and shouting ‘Azungu’ (white man) ‘Hello, hello’ ‘how are you?’ and ‘where are you going?’, we saw everyday life carrying on as we cycled through countryside and towns and everywhere we went, the children came and cheered us on.

I don’t think they knew what to make of us and they definitely didn’t understand why we were there, but their enthusiasm, beautiful faces and cheering definitely kept us all going.

Around every 15km we had a short drinks stop, an opportunity to fill up our water bottles and have a snack, all provided by our amazing road crew with a smile and an encouraging word. Lunch was a longer affair, about an hour, where we were provided daily with an array of enormous bread rolls, cheese, ham, chicken, delicious tomatoes, salad, coleslaw, crisps, fruit, everything we needed to refuel and all prepared on the back of the bus. 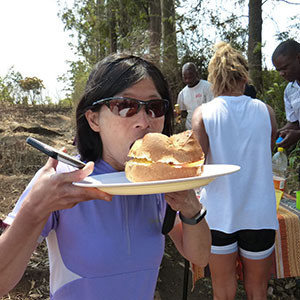 Lunchtimes also became a time to stretch out, lie around on the mats groaning, discussing which sports drink to take next, topping up on painkillers from Dr Chris, a bit of bike maintenance and the main pastime, finding somewhere to have a wee that was away from the curious children who appeared and stayed with us as soon as we arrived. They were usually awarded by sweets handed out by Eric who made them line up and kept them in order so that no-one ever missed out. I have to admit I found it quite hard to hand over my Percy Pig sweets but it was worth it to see how much enjoyment they gave.

Eric head of our ground crew became one of the most important people for me although I don’t think he realised how pleased I was to see him in his fluorescent jacket guiding me in to where the bus was parked for our breaks. I have never been to glad to see someone.

With the heat of the first few days our breaks became more frequent, both to fill our bottles and to have it poured over our heads and necks to cool us down. None of us could ever have imagined how hot it actually was and without these breaks we would have struggled.

At the end of our first day we were rewarded with an beautiful cycle towards the lake and into the sunset down the aptly named Road to Monkey Bay. What an amazing road and an incredible cycle, a long flat road cycling towards the hills with the lake beyond and an enormous setting sun in the sky silhouetting the Bao Bao trees. Moments like this made it all worthwhile, that and the cold beer at Cape Maclear Lodge.

Back in the saddle

Day two and everyone was up early and on the beach haggling for sarongs before breakfast.  The feeling was relaxed as we set off knowing our cycle wasn’t as far as yesterday and ended by the lake at Mangochi at the Open Arms cottage with the obligatory cold beer.

That evening after a fantastic ‘braai’ and much singing and dancing hosted by Charlie, the Open Arms ‘Man in Malawi’ we all slept well knowing we had a rest day to look forward to. 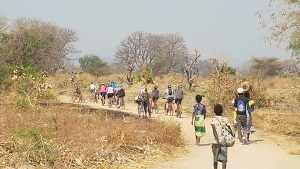 Day three was our day to really experience the work that Open Arms does.  We were on our bikes once more, this time joined by Charlie and Rashid, the administrator at the home in Mangochi, and cycled the 10km down rough, sandy tracks to the village of Mtinsje where our corporate and school groups had worked throughout the summer to build our latest nursery school and feeding station.

As we approached the village we could hear singing and were greeted by a group of young men dancing and singing and, we were soon to find out, rehearsing for the opening.

As we reached the clearing in front of the school we were greeted by hundreds of people, all there to celebrate the opening of this much needed facility. 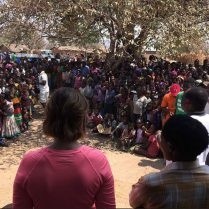 There followed, dancing from men, women and children and, speeches before the official ribbon cutting followed by more speeches and dancing. It was an indescribable atmosphere of joy and thanks. This is when it really hits you that these people have so little materially compared to us but so much in other ways that they appreciate so much more. We had an amazing morning at the village and were welcomed whole heartedly, you couldn’t fail to feel happy and uplifted.

The afternoon was spent at the Open Arms infant home in Mangochi where once again we were greeted by singing and dancing from local people.

It was the ladies of Open Arms who stole the show getting all of us up dancing and actually dancing us into the home to meet the children and see how Open Arms really works.

To read how the rest of the trip played out have a look at part two here. 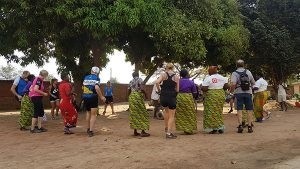