The adventure of a lifetime - part two

Day four and we were off again, this time joined by Charlie who was staying with us for the rest of the trip causing much consternation amongst the group as many of us noticed his lack of padding either on his saddle or nether regions!

It’s hard to say which of the next three days was the hardest! Today was the longest – nearly 100km some of it on roads that were being rebuilt with some off road parts, perfect for taking a tumble, and some on part built roads with ‘unusual’ surfaces. It was a long day, starting at 6.30am from Mangochi and finishing around 4pm at Hippo View Lodge in Liwonde. I don’t think I have ever been so tired or so dirty and the cold beer when we arrived was much needed. 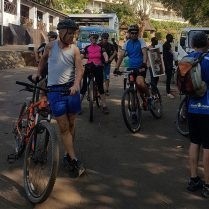 Next morning we were all up at 5.30am ready for our sunrise river safari. A treat to see elephants, hippo, crocodiles, water buffalo, fish eagles and watch daily life on the river and marvel at these people fishing in their flimsy boats alongside crocodiles and hippos. You wouldn’t have got any of us out there.

Following breakfast and our daily briefing from Claude who reminded us of the long, hard hill out of Lilongwe and then our climb up to Zomba, we set off, thinking it can’t possibly be that bad.

It was, a tough 54K ride with a 600m climb, the last leg into Zomba was relentless and even the fittest struggled. I was never so pleased to see Eric in his fluorescent jacket! 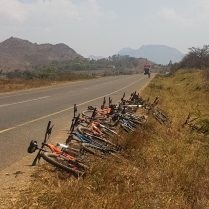 A few hardy, possibly mad, souls, namely Peter, Greg, Richard, Ben and Amy decided to take on the climb to the top of the plateau, a gruelling 700m of climb over 10k. The rest of us took the bus up and sitting at the top admiring the amazing view drinking beer, I didn’t need much convincing that I had done the right thing. They all made it and should be really proud of an amazing achievement.

The last day arrived and we were all a bit subdued; amazed that we were so close to the end and knowing that we had a big welcome awaiting us in Blantyre and a night of celebration. But first we had to cycle 50k and it promised to be another hard day. Poor Claude, every morning he had to deliver the bad news but managed to convince us that it was nothing worse that we’d done and we could all do it – and we believed him.

After group photos in our team cycle jerseys provided by Citrifine we set off. The cycling was tough as promised and there were a LOT of sharp hills with downs on the other side, after a while, throwing all caution to the wind I decided to make the most of those downs took my hands off the breaks and went for it!

After all I was going home tomorrow, it was fantastic!After lunch we all crossed the unofficial finish line somewhere on the road from Zomba to Blantyre. 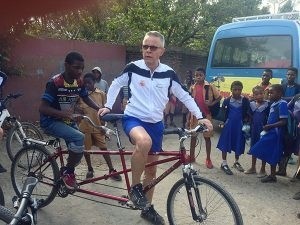 Our bikes were loaded on the truck, we climbed on the bus and made our way to the end of Kabula Hill Road for our final leg, cycling into the home in Blantyre. Here we were joined by Aubrey one of the longest residents of Open Arms who was going to lead our cycle into the home by tandem with Charlie.

I knew that something special awaited us at Open Arms and that the preparations had been going on all week. I knew that each of us had been stitched a flag with our names on by the mothers and children and I knew it would be an amazing finish to our journey but I had no idea….

As we cycled down the familiar road, past the turning to Mackays, past Casa Mia, past Take Five, the noise reached us before we saw them, joyous singing, clapping, cheering, then we saw the balloons and flags waving, mothers and children huge smiles unconditional joy for our achievement. 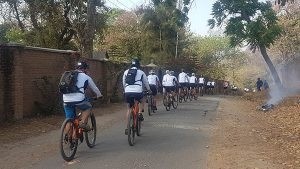 They followed us through the gates still singing, still dancing. It was an absolutely unforgettable experience, they made it all worthwhile. Then into the garden for speeches and that all important cold beer. What a fantastic, end to our adventure together.

We were treated to a fantastic celebration meal hosted by Dani an Open Arms trustee and David her husband which gave us all the chance to relax and reflect on our week, experiences shared and new friendships made. 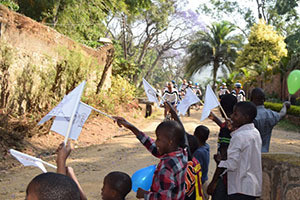 I didn’t dream how tough it would be, how much I would learn about myself or how wonderful the group I met would be. We all had something to offer, we all contributed and we have a great Whatsapp group to keep in touch with more cycles planned for next year. 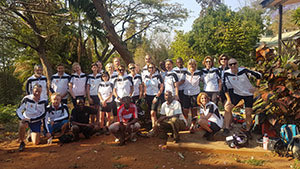 “For that man who travels by his own exertions, no day can be dull and no journey without an abiding interest” H W Tilman ‘Snow on the Equator’

Would you do it?

If Judith’s story has inspired you to get involved, you can register your interest in our next challenge by emailing her on Judith@openarmsmalawi.org. Or if you are looking for something a bit nearer home then have a look at our UK challenges, we’d love to hear from you.

When the idea of a charity cycle ride in Malawi was first suggested there were all sorts of reasons for it to be a good idea. After all having a bike in Malawi is not a leisure choice but an absolute necessity. Without a bike many people cannot travel the long distances along tracks to main roads to get to work, they cannot carry the loads they need to make a living and even the taxis are bikes. And so when the idea came about, the planning started.