Erin volunteered in Malawi and Tanzania, during her gap year and on her blog she reflects on her journey and experiences. Erin spent some time at Open Arms and shared her thoughts and stories of her time with us.

This blog post is taken from her blog (My Gap Year Story) where you can read more about her adventures. A big thank you to Erin for allowing us to publish this.

Yesterday, the father of two of the babies at Open Arms Infant Home came back to visit. Fredson hesitantly stayed on the outside bench, wringing his hands and waiting. Finally, he was reunited with his three-month-old twins. He gingerly took his first baby girl, Siara, in his arms and smiled wide. When I introduced myself, Fredson joyfully exclaimed “These are MY twins!” in broken English. At that moment, he was not an impoverished Malawian farmer. He was not a husband whose wife had tragically died from cesarean section complications only weeks beforehand. He was not a father who was forced by desperation to separate from his children for a few years. He was just a dad — a dad who was endlessly proud of his two beautiful twins. All the tragedy was forced to the fringes of his story for an instant by the beloved sight of his babies. And that is an image I will treasure. Because despite all the pain and hurt and poverty, love won for that moment.

I arrived at Open Arms Infant Home in Blantrye, Malawi three weeks ago and will be volunteering here for the next few months. This is truly a special place. I have not only fallen in love with the kids, but also with the concept and sustainability of the organization.

Open Arms Infant Home was started over 20 years ago by two ladies Davona Church and Margaret East caring for 27 orphaned babies. Neville and Rosemarie Bevis, a couple with a big hearts and a God-sized dream took over the running of the home in 2000 and today Open Arms cares for over 100 children in its homes and over 400 through village outreach projects.

They do not call themselves an orphanage because they do not intend to keep vulnerable children in institutional care for their entire lives. Instead, Open Arms aims to empower families and enable communities to provide for their own. The government’s Social Welfare Office refers orphaned and abandoned babies to them. The children, many of whom are malnourished or sick, then live at one of two infant homes while they regain their strength. At two-years-old, most are reintegrated back into their villages as healthy, happy toddlers to be looked after by their surviving father or grandmother. The  new guardian is even asked to come stay on the building’s premises for a few days in a mock “village hut” to slowly transition the child into his of her new surroundings. The reintegrated children then receive outreach support — including access to Open Arms’ feeding programs, nursery education, and monthly cash transfers. Surviving family members of over 500 Malawian children have been equipped to keep and care for them through this sustainable approach.

One of these children is Joyce. She is a spunky child whose life has been greatly enriched by the organization’s thoughtful methodology. She came to Open Arms as a tiny, malnourished, HIV positive baby. Because of her illness, the first year was tough. But thanks to affectionate love, good nutrition, and successful ARV treatments, Joyce is now a healthy two-year-old. She runs everywhere she goes and is already a leader among the toddlers. Her grandmother comes frequently to visit and will bring Joyce home to the village at the end of the rainy season.

Another child who will make this transition from tragedy to hope is Stafford. He arrived at Open Arms yesterday and is only five weeks old.  His grandmother and a government social worker brought little Stafford to us. They signed the papers, told us his story, and entrusted this 6-pound infant in our care. It is heartbreaking to know that his young life has already been marked by unspeakable violence: his father beat his mother to death on Christmas Eve and then fled. The love of his impoverished grandmother is not enough to provide the necessary formula or care now. But Stafford, like Joyce, will be returned to his grandmother as an immunized and well-loved two-year-old.

And as I fed Stafford his bottle last night, it was hard to fathom the unthinkable story behind the adorable face. Oftentimes, even though I am holding the babies in my own arms, the painful reasons they must be here still feel unreal. My days are full of rocking babies and feeding toddlers and washing seemingly endless dishes. So it is easy to get lost in the tasks and forget the stories. But yesterday, Stafford’s arrival served as yet another reality check. Even though the day was long and many of the routines were monotonous, I stayed late to rock Stafford to sleep and whisper prayers over all the littlest babies. Their lives have been — and may still be — very hard. But for now, they are here and their futures are marked by undeniable hope.

But not all of the infants at Open Arms will be reintegrated back into their families. Neville recognized that some of the kids would not have suitable guardians to which to return. So he created an innovative model that gives children, like young Grace, the enduring love of a family and the long-term stability of a home.

Grace is celebrating her seventh birthday this week. We went out for cheesecake together at a fancy restaurant, shared silly laughs, and danced our way into the new year. Although Grace was abandoned in a city park at birth and remains HIV positive, her future is bright. Since she has no known relatives, Grace will likely remain at Open Arms for many years to come. She currently lives at Harrogate House, a transition space between the infant home and the Foster Houses. Grace lives with six brothers and sisters, and she attends a prestigious local school. In the next few years, she will move into one of the organization’s Foster Houses. These are family-centered homes with two house mothers and seven children who have no suitable guardians to which to return. The current 40+ foster kids live in safe neighbourhoods, go to the best local schools, and are part of a family as authentic as any other.

Although the organization has a long-term vision of the infants either being reintegrated into the villages or joining a foster family, there are other children, like Ezra, that Open Arms just chooses to love one day at a time — because the past is tragic and the future is unclear.

Ezra was abandoned in the city of Blantyre as an 8-month-old. After days of heavy rain and flooding, he was left with just the clothes on his back and a medical note explaining a hernia. After he was brought to Open Arms, the doctors soon discovered a hole in his heart. The organization started a #backEzra fundraising campaign to send him to Germany in December and have the life-saving operation. But he came back to Malawi last week; the hole in his heart was too big to operate on. So now this little boy will live out his final 5-10 years here.

How do you play everyday games with a child whose days are unjustly numbered? How do you stand in as the family and friends and community that would normally rally around this tragedy? How do you keep fighting for the life of a beautiful boy who is bound to die? I have no idea. But the mantra of Open Arms seems to occupy the confusing silence: “Love, one day at a time.”

The headlines of these children’s lives and their status as orphans is hard to comprehend. But the babies’ individual stories tell of nuanced pain and redemptive hope. And even when the past is dark and future hope is hard to salvage, there can still be love here now — which I am learning to make be enough. One day at a time. 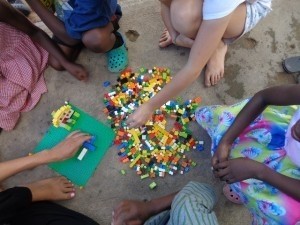 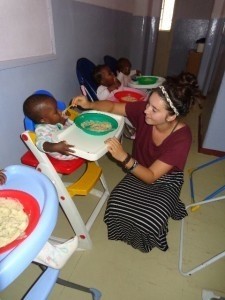 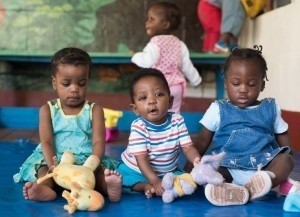 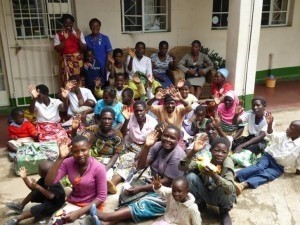