Jeremy Stokes writes about his experiences cycling the Prudential RideLondon 100 which he completed for Open Arms earlier in August. From the early start to the challenge of the route and the camaraderie of his fellow cyclists, Jeremy's view is entertaining and full of useful information. 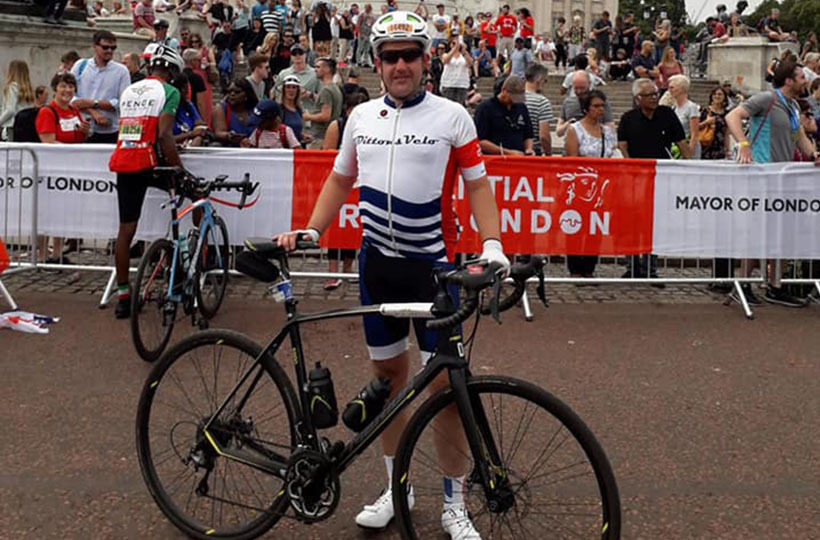 I’ll be honest with you, it’s been a long time since I’ve been out and about at this time of day. Maybe it was the time I had to get up to catch a cheap 7 o’clock flight to Spain around a decade ago. Or maybe it was some jet-lag time-zone experience that had been wide awake and bouncing off the walls of some hotel room in Asia. Either way, it absolutely was not the precis to an attempt at an endurance endeavour. That all changed on the day of RideLondon 2019.

I’d ridden the event twice before but both times with a substantially later start time so being assigned a 6.44 departure slot meant that I was introduced to trying to bolt down breakfast at a time when I’d have been happier with my eyelids clamped shut. The countdown to the ride hadn’t gone smoothly either. In addition to retaining a smidgeon of strength-sapping infection from my last trip to East Africa (read more about this in his previous post), I had taken my bike into my local shop for a quick check-over and tune-up early in the week before the ride.  It didn’t turn out well. A crack in the frame rendered it unsafe to ride and necessitated a frantic round of calls to identify a suitable bike from someone suitably similarly sized in order to make the start line.

I was therefore extremely fortunate to be able to load a bike into a taxi to head off from south west London to head across London to the Olympic Park at a time when people were still swaying home from their Saturday nights out. As we got closer to Stratford more and more cyclists emerged heading eastwards. Alighting from the taxi and reassembling my bike somewhere in Bow, I joined the line of those making their way to the start. A strict filtering system saw me in my starting pen just after 5 am and with almost two hours to kill before the flag-dropped on my wave. That proved to be a lot of time to soak in the vibes of my fellow competitors which could be said to have been a heady mix of over-confidence and fear. There were some back and forth chats, some attempts at camaraderie and some people who slid their sunglasses down and shut off from pleasantries.

Gradually my start lane crept forward at the pace of an arthritic slug until we eventually emerged in sight of the start line as each wave was assigned a song to send us on our way. Safe to say that the choice of ‘Fat Bottom Girls’ by Queen would not have been my go-to motivational music, so I was immensely relieved to head out amongst a phalanx of lycra-clad comrades.

The first few miles were a blur as static muscles whirred into life, people rubbernecked around to look for their mates, the first few punctures hit and – inevitably – the first, of sadly many, accidents that I saw on the day.

After a spaghetti line of overpasses and tunnels, we were spat out into Tower Hill. The novelty of closed-road riding through red lights, weaving onto the right hand-side of the road, started to fade off. I managed to fall in with a couple of other riders of similar pace and we managed to rotate quite nicely through the centre of London passing spectators, charity cheer squads and a bunch of bemused looking tourists who realised that road crossings were going to be a difficult thing to achieve all day. Nearing Chiswick, one of my compadres muttered something about it being all too quick, feeling a bit sick and dropped off. Then only a few hundred metres later my remaining road colleague looked disconsolately down at his front tyre which no longer had any air in it. 15 miles in and from then on, I never did quite manage to fall in with another rider willing to share the work. Still, it was lovely to approach home territory as we sliced through Richmond Park and into Kingston, passing the house I had left almost 5 hours before, and a small crowd of supporters. Stripping out past Hampton Court and the first major feed station, it started to become apparent that my borrowed bike was slightly differently set up to my own and niggly knee pain emerged and was to remain my constant companion all day.

The course jagged out through the Surrey countryside, the volume of riders forcing concertina-ing as the road squeezed in and out, riders pulled off to greet friends and family or suffered a mechanical.

It wasn’t really until I hit the climb of Newlands Corner, 48 miles in, that things started to even out a bit and settle down into a steadier pace as the route went out into the Greensand Hills and the climb of Leith Hill.

A virtual silence descended amongst me and my fellow riders as we settled into the grind of the climb with only the occasional grunt of encouragement and a smattering of industrial language as we ascended under dense tree cover before a double-digit gradient eventually relented to a long swooping descent. I was fortunate. Not long behind me, a tree – weakened by all the recent winds – creaked over forcing riders behind me to stop and wait, whilst others were forced to change route. Some also missed out on the final big climb of the day, Box Hill. A constant caterpillar of riders on the day, I picked left and right past those who were nearing the end of their energy, whilst a fair few others jetted by in pursuit of a good time.

From there, it was a long roll into London. By now the early start was really kicking in and things started to get a bit hazy until the return to Kingston over 80 miles where apparently my small team of supporters had temporarily abandoned their posts in favour of a liquid lunch. I couldn’t blame them. With riders joining from the 46-mile routes, there were a number of stops to prevent congestion which didn’t help the aching muscles which were by now wanting to get to the finish line as quickly as possible. Wimbledon Hill was crested and then my favourite bit of the day, a swooping descent down Putney High Street back over the Thames and snaking our way down the north bank.

Eventually Parliament came into view, a quick dog leg onto the Mall and there it was. Buckingham Palace and the finish line, less than six hours after I had set out, although it felt like a different day.

And then it was all over, a quick exchange of photo opportunities with other finishers and a medal draped over my shoulders and funnelled out at the top of Constitution Hill by the Wellington Arch.

Half an hour later, I was standing on Platform 8 at Vauxhall Station waiting for a train home munching a cheese and onion pasty as a lady wandered up to me. Given that I wasn’t fantastic and fragrant, I did wonder what she wanted.  “I’ve got to ask”, she said, “is there some sort of bike ride going on today?”.

Are you inspired to complete a challenge and raise funds for Open Arms Malawi? Please get in touch to talk further with our fundraising team.