Tiny twins Alexander and Gerald were referred into Blantyre in May 2017.  As with many babies, they were admitted after their mother died of complications following their birth. 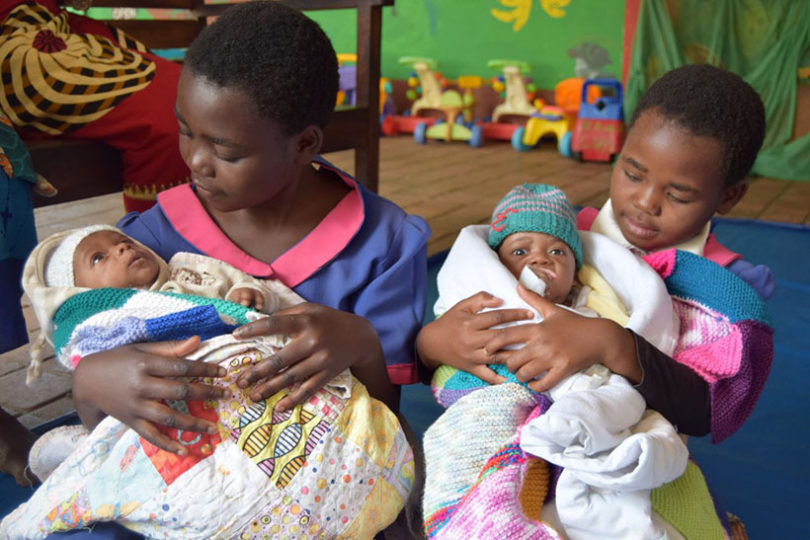 They were just 11 days old and weighed only 2.4kg each!  Alexander and Gerald’s father, Elton, supports his two older children by selling plastic bags at nearby Mbayani market but after losing his wife when the twins were born, he struggled to cope. Understandably, the arrival of twin boys was just too much for him to manage alone.

He was not able to provide the formula they needed or give them the care they depended on while working and supporting his older children.  After consultation with the Social Welfare team, they were referred to Open Arms to make sure they could receive the care that was essential for their survival and development.  Staff were delighted to see the commitment of their father as he made regular visits to the boys to cuddle them, feed them and as they got older to play with them.  It was heart warming to see the bond growing between them all and staff enjoyed his visits.

Towards the end of their first few months at Open Arms, baby Alex became unwell.  It is common for such vulnerable babies to need a bit of extra medical help and when they do, they often need it very quickly to prevent long term damage.  Staff work very closely with the local hospital in Blantyre to support the children that we care for and so Alex was taken into hospital straight away.  His twin brother baby Gerald has always been slightly stronger and thrived from an early age.  After a short time away, Alex was back at Open Arms with his brother very quickly.

Growing up with their family

Once into the routine care of the Open Arms mums, both twins started growing well and developing socially.  Looking through the pictures you can see them starting to sit up a bit more and looking around at their surroundings.  Their father and sisters come in to see them regularl 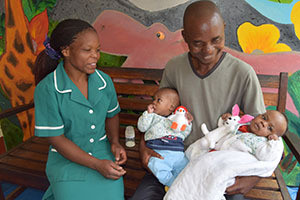 The pictures shows their transformation from tiny babies into toddlers and Elton enjoyed the interaction they were able to have.   At one year old, they were on the move.  The care, medicines and good nutritious food has enabled their development into the inquisitive little boys they have become.  Other milestones were celebrated, as they were weaned from formula milk onto porridge and other solid foods improved their strength and they became much more active.

Throughout their stay, they built relationships with their peers and developed their coordination and independence through playing on the equipment in the garden and with toys and other materials on the khonde.

The security of a family

An important part of their story so far is clearly their father Elton.  His dedication and commitment to the boys is inspirational.  He has made twice weekly visits for the past two years, which has enabled them to continue to bond both with him and their sisters. 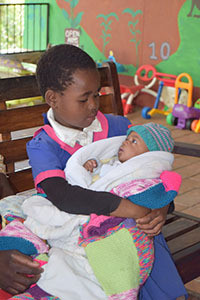 Now at two years old, Alex and Gerald have returned back home to their village with Elton.  They are fit and well, showing all the right signs in their wider development and are ready for their next chapture at home.  Matron Enniffer has monitored the boys since they were referred to us and she will continue to visit them at home for as long as they need her help and support.

Director of Operations, Charlie McCaulder told us 'Child carers associated with Open Arms children are almost exclusively female, however, the dedication shown by Dad Elton consistently over the last two years has been incredible. I’m sure his sons will do well.' 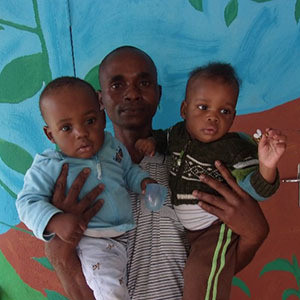 Your generous support has contributed to the care of Alex and Gerald in our Blantyre Infant Home.

Not every child has the best start in life, but through your support we can continues to make sure that every child referred to us has the help they need for a future they deserve back at home with their families.

It costs us over £100,000 a year to run each infant home providing essential care for upto 40 babies.  You can support us by making a one off gift or by sponsoring a child like Alex and Gerald today.  Click here to get involved. 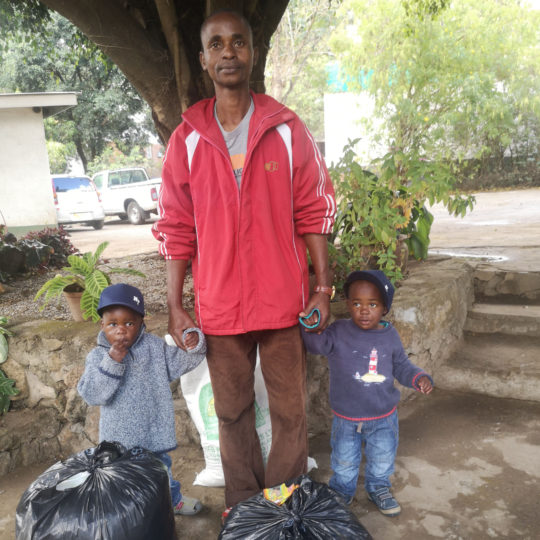